An emblematic discussion of the modern era is on the value of certain jobs to a society. The commonly accepted view is that many high paying professions add minimal value to society. These pundits argue non-financial or non-quantifiable benefits of certain jobs are overlooked. Although some of this thinking is important to consider, we find most discussions fail to include two major considerations.

First, there is often little discussion of the societal benefit reaped by taxation. In fact, there is reason to believe that for most jobs, the primary method employment benefits society is through taxation.

Second, there is little delineation between individuals and collectives. The collective group of employees of any field will almost certainly benefit society. However the marginal employee very likely does not. This is to say that the first employee of a certain field, however incompetent he is, provides society with a highly differentiated service and is heavily beneficial to society. The last unit of labour provides no such benefit.

The societal value of labour is fairly well defined as the sum of the producer surplus (the value that accrues to the individual performing the labour) and the consumer surplus (the value that accrues to the person who pays). Taxation is then added to the analysis. Taxation reduces supply, which shifts producer and consumer surplus into benefits for the government. Most discussions of societal benefit exclude producer surplus as that is a private benefit. The image below is a representation for the components of societal benefit. 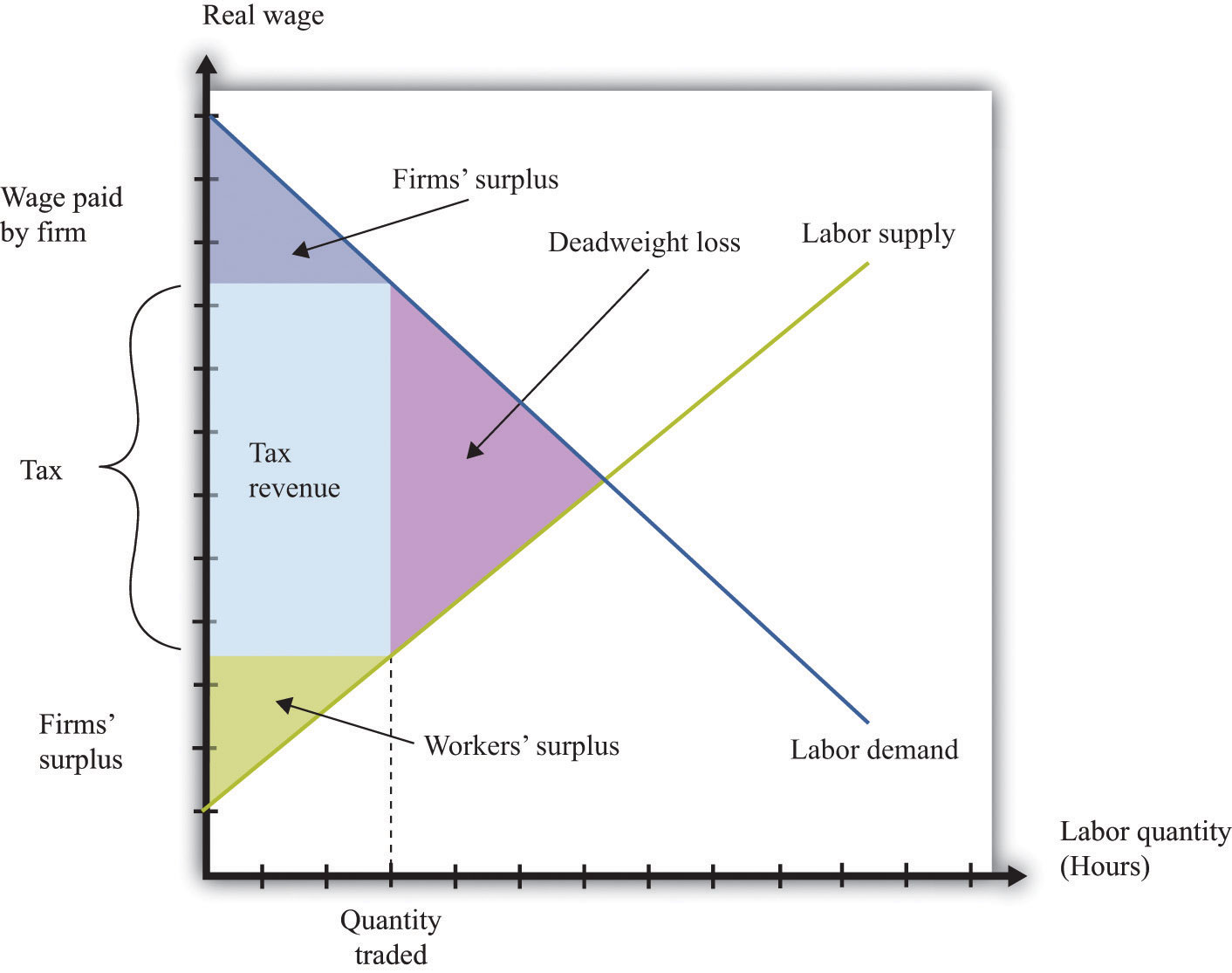 The amount of value that accrues to the employee vs society is a function of the elasticities of supply and demand. If there is a limited amount of labour able to perform a task, the value will more likely accrue to the employee. We believe most jobs that over-earn fall under this category. On the demand side, if there is a large amount of price-insensitive demand for a task, the value is more likely to accrue to “society”. When a disproportionate amount of value is captured as producer surplus (ie when a limited supply of labour provides a service that is not well valued) income taxes disproportionately hurt the producer.

Consideration of taxation is paramount. Assume a government employee enters the private sector, fulfilling effectively the same role. If the employee receives a pay increase sufficient to pay the government enough taxes such that the government can use the tax money to hire someone new, then the employee has created substantial value for society.

Even more important to consider is the disaggregation of the individual from the collective. Although in aggregate, a profession will certainly create societal value, the marginal worker supplies labour to the lowest value demand. Assume that a worker can leave the workforce without increasing wages for that profession (which is to say the market is well supplied. Very specialized professions will not apply to this analysis). At this point in the demand curve, the entire societal value of the marginal worker is contained in the taxes that are paid (since at this point in the graph, taxes are dense, whereas consumer surplus vanishes). This would argue that on the margin, one strategy would simply be to maximize taxes paid.

Philosophically, this argument has problems. It does not satisfy Kantian logic of universalizability. For example, should everyone choose to not vote in an election, then the vote would be inconclusive. So whether one chooses to maximize taxes paid or maximize total consumer surplus plus taxes paid depends on whether you are the type to vote in an election.

There are rare examples where the rationale in this article do not hold but they are quite exceptional. For most well supplied positions, it is clear that taxation is a major source of value that needs to be constantly considered. Furthermore, we would argue the concept of consumer surplus is a fairly philosophical concept. Although it needs to be considered by lawmakers and society as a whole, an individual as a marginal producer actually has very little effect on consumer surplus, but has a large effect on taxation.